My apologies to anyone who read this before the evening of October 8. I set this to post automatically, but for the wrong date and without all that I wanted to include.

I’m a big fan of music but as I’ve gotten further away from my undergrad years, I’ve become less familiar with what is currently playing on the radio. Thanks to my brother’s children, I have some semblance of a grasp on certain musical genres, but I have absolutely no idea what’s happening in the world of country music (I did at one point, as I went to undergrad in Virginia).

I decided to use Voyant Tools to do a text analysis of the first 10 songs on the Billboard Country chart from the week of September 8, 2018. The joke about country music is that it’s about dogs, trucks, and your wife leaving you. When I was more familiar with country music, I found it to be more complex than this, but a lot could have changed since I last paid attention. Will a look at the country songs with the most sales/airplay during this week support these assumptions? For the sake of uniformity, I accepted the lyrics on Genius.com as being correct and removed all extraneous words from the lyrics (chorus, bridge, etc.).

The songs in the top 10 are as follows:

If you would like to view these lyrics for yourself, I’ve left the files in a google folder.

As we can see, the words “truck,” “dog,” “wife,” and “left” were not among the most frequently used, although it may not be entirely surprising that “ain’t” was. 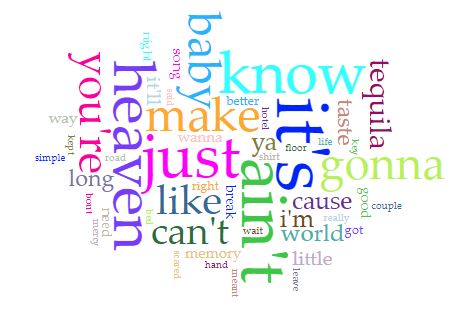 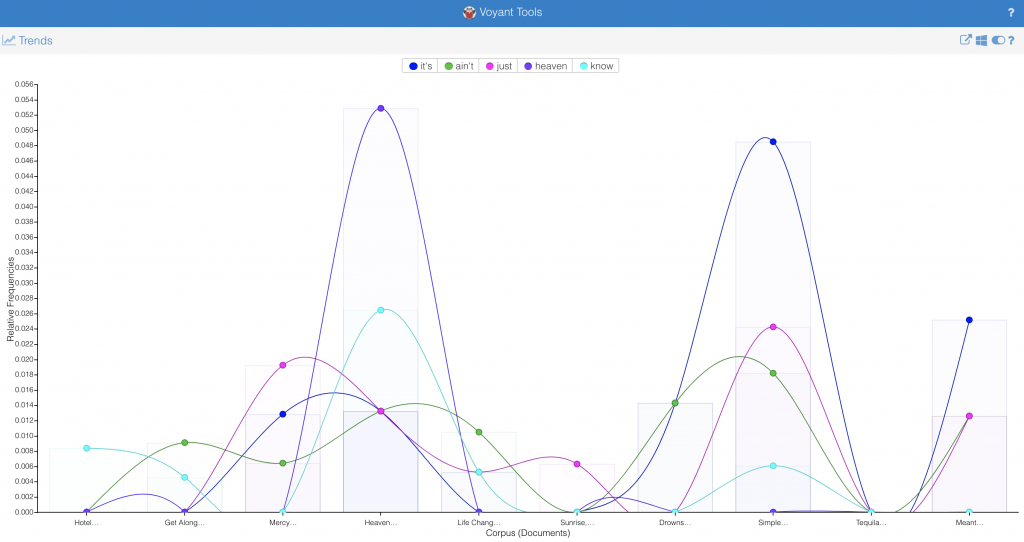 The most frequently used word in the corpus, “it’s” appeared only 19 times, showing that there is a quite a bit of diversity in these lyrics. I looked for other patterns, such as whether vocabulary density or average words per sentence had an effect on the song’s position on the chart, but there was no correlation.