The Digital Fellows’ “Format Your Dissertation Like a Pro: Writing with Markdown” workshop taught by Rafael Davis Portela introduced Markdown, a markup language (a way to annotate and present text in a document using tags, with HTML being one example) meant for writing dissertations, web content, notes, or really any form of text, that uses relatively limited formatting options so that the focus remains on the actual writing itself.

Basically, you’re writing your document in a plain text editor with the ability to add minimal formatting to it using syntax. There are benefits such as being able to move paragraphs around without worrying about messing up the formatting, writing lists without being concerned about the specific order, and including notes to yourself that don’t appear in the final version. The file is a plain text file so you don’t have to worry about compatibility issues and you can easily convert it to other formats when you’re finished such as a doc, pdf or html file, or even into presentation slides.

You will need to download some tools to convert the Markdown file when you’re done and if you prefer, you can create the Markdown file itself in Terminal, the info for which is all found on Rafael’s Github page for the class. Just to try using Markdown, you can use Visual Studio Code like we did in the workshop or another text editor, and save the file as a .md file. Or try Markdown in a browser without installing anything at dillinger.io.

You’re pretty much just writing your text in the text editor but when you want some basic ways of structuring or styling your text, such as for headlines, lists or links, here’s some of the syntax you can use. (I wasn’t sure of the best way to present the syntax and the result in WordPress so I used screenshots.)

Headings: For the equivalent of headings in Word or Google Docs, you use the pound sign (or hashtag). I’m not sure the best way to present the syntax 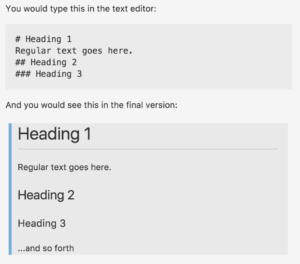 Block quotes: Add a “>” in front of the text to make a block quote. (Correction: The result is missing the words “in Markdown.”) 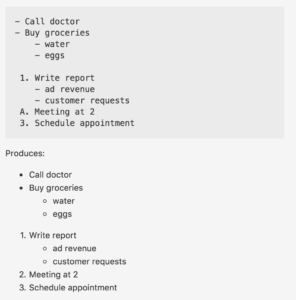 Comments: A comment doesn’t appear in the final version. It can be a reminder or note to yourself. Or it can be text you’re not sure you want to include in the document but in case you change your mind, you simply remove the syntax, which is:

<!– A comment surrounded on both sides by the syntax –>

Links: Use brackets for the text you’re linking and parentheses for the URL with no space in between.

One thought on “Workshop: “Writing with Markdown””

Built with WordPress | Protected by Akismet | Powered by CUNY