My process with the Praxis 1 Text Mining Assignment began with a seed that was planted during the self-Googling audits we did in the first weeks of class, because I found an obituary for a woman of my same name (sans middle name of initial).

From this, my thoughts went to the exquisite obituaries that were written by The New York Times after 9-11 which were published as a beautiful book titled Portraits. One of my dearest friends has a wonderful father who was engaged to a woman who perished that most fateful of New York Tuesdays. My first Voyant text mining text, therefore, was of his fiancee’s NYT obituary. And the last text I mined for this project was the obituary for the great soprano Monserrat Caballe, when I heard the news of her passing as I was drafting this post.

The word REVEAL that appears above the Voyant text box is an understatement. When the words appeared as visuals, I felt like I was learning something about her and them as a couple that I would never have been able to grasp by just reading her obituary. Indeed, I had read it many times prior. Was it the revelation of some extraordinary kind of subtext? Is this what “close reading” is or should be? The experience hit me in an unexpected way between the eyes as I looked at the screen and in the gut.

My process then shifted immediately to song lyrics because, as a singer myself who moonlights as a voice teacher and vocal coach, I’m always reviewing, teaching and learning lyrics. I saw the potential value of using Voyant in this way in high relief. I got really juiced by the prospect of all the subtexts and feeling tones that would be revealed to actors/singers via Voyant. When I started entering lyrics, this was confirmed a thousand fold on the screen. So, completely unexpectedly, I now have an awesome new tool in my music skill set. The most amazing thing about this is that I will be participating in “Performing Knowledge” an all-day theatrical offering at The Segal Center on Dec. 10 for which I submitted the following proposal that was accepted by the Theater Dept.:

“Muscle Memory: How the Body +  Voice Em”body” Songs, Poems, Arias, Odes, Monologues & Chants — Learning vocal/spoken word content, performing it, and recording it with audio technology is an intensely physical/psychological/organic process that taps into and connects with a performer’s individually unique “muscle memory”, leading to the creation of vocal/sound art with the body + voice as the vehicle of such audio content. This proposed idea seeks to analyze “songs” as “maps” in the Digital Humanities context. Participants are highly encouraged to bring a song, poem, monologue, etc. with lyric/text sheet to “map out”. The take-away will be a “working map” that employs muscle memory toward learning, memorizing, auditioning, recording and performing any  vocal/spoken word content. –Conceived, written and submitted by Carolyn A. McDonough, Monday, Sept. 17, 2018.” [I’m excited to add that during the first creative meeting toward this all-day production, I connected my proposed idea to readings of Donna Haraway and Kathering Hayles from ITP Core 1]

What better way to celebrate this, than to “voyant” song/lyric content and today’s “sad news day” obituary of a great operatic soprano. Rather than describe these Voyant Reveals through writing further, I was SO struck by the visuals generated on my screen that I wanted to show and share these as the findings of my research.

My first choice was “What I Did For Love” from A Chorus Line (on a sidenote, I’ve seen the actual legal pad that lyricist Edward Kleban wrote the score on at the NYPL Lincoln Center performing arts branch, and I thought I had a photo, but alas I do not as I really wanted to include it to show the evolution from handwritten word/text to Voyant text analysis.) 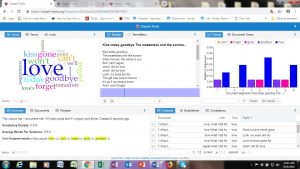 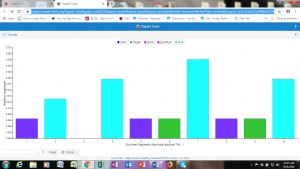 I was screaming as the results JUMPED out of the screen at me of the keyword “GONE” that is indeed the KEY to the emotional subtext an actor/singer needs to convey within this song in an audition or performance which I KNOW from having heard, studied, taught, and seen this song performed MANY times. And it’s only sung ONCE! How does Voyant achieve this super-wordle superpower?

I then chose “Nothing” also from A Chorus Line as both of these songs are sung by my favorite character, Diana Morales, aka Morales. 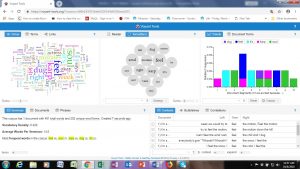 Can you hear the screams of discovery?!

Next was today’s obit for a great soprano which made me sad to hear on WQXR this morning because I once attended one of her rehearsals at Lincoln Center: 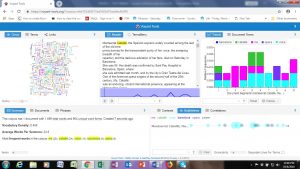 A complex REVEAL of a complex human being and vocal artist by profession.

AMAZING. Such visuals of texts, especially texts I know “by heart” are extremely powerful.

Lastly, over the long weekend, I’m going to “Voyant” this blog post itself, so that its layers of meaning can be revealed to me even further. –CAM