In “The Hermeneutics of Screwing Around,” Ramsay is very interested in the concept of serendipity – the ways that readers unexpectedly come across just the right information at just the right time.  Of course, one of the things you learn in library school is that serendipity is an illusion created by the infrastructure of the library, as Ramsay acknowledges. Serendipity comes from the fact that someone has put all this information in order so that readers can find it.

Ramsay distinguishes between two ways of encountering information; purposeful searching through the use of indexes and the like, and browsing, which he characterizes rather delightfully as “wander[ing] around in a state of insouciant boredom.” He argues that because the internet is not organized in a human-readable way, search engines are very good at searching, but poor at browsing, which means that it’s more difficult to find that thing you didn’t know you wanted.

I’m with Ramsay up to this point.  One major problem with electronic resources is that they don’t support browsing well. There have, at least among libraries, been some attempts to replicate some of the tools that make browsing work offline, but they don’t work as well. OneSearch has a feature that lets you look at books nearby on the shelf, and I’d love to know whether anyone in this class has ever used this, because I suspect not! Part of the problem is that the process still has to begin with a specific search; part of the problem is that, unlike when you are browsing the physical shelves, you don’t have access to the full text of the book.

What really brought me up short when I was reading this, though, was the very casual way he tosses out the notion that algorithms can fix this problem.

A few weeks ago, Data & Society published a report, “Alternative Influence: Broadcasting the Reactionary Right on YouTube.” It’s definitely worth your time to read the whole thing if you can, 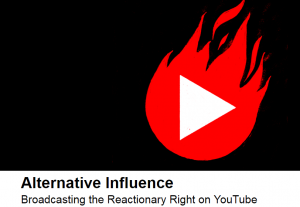 but it examines the network of white supremacist/white nationalist/alt-right microcelebrities on YouTube. Because many of these individuals have strong relationships with their audiences and are able to “sell” them on their ideologies, they are considered “influencers.” The report maps out the relationships among them based on their appearances on each other’s shows. It reveals connections between the extremists and those who are or describe themselves as more moderate libertarians or conservatives.

The process by which these YouTubers’ audience members become radicalized is a browsing process; the description of how an audience member moves from one video channel to another isn’t, mechanically, that different from Ramsay’s description of moving from Zappa to Varèse, as different as it obviously is in subject matter.  He happens to come across one who then points him to another.

For example, influencers often encourage audience members to reject the mainstream media in favor of their content, thus priming their audiences for a destabilized worldview and a rejection of popular narratives around current events. Then, when libertarian and conservative influencers invite white nationalists onto their channels, they expose their audiences to alternative frameworks for understanding the world. Thus, audiences may quickly move from following influencers who criticize feminism to those promoting white nationalism. (35)

Algorithms facilitate this process by recommending similar videos, but the report points out that this is really a social problem; even if the recommendations didn’t exist, these YouTubers would still be promoting each other and radicalizing their viewers. Certainly we could argue that the larger problem is not the mechanism of discovery but just the fact that there’s so much of this kind of content out there. After all, older kinds of browsing can turn up similar content, and let’s not pretend that the Library of Congress headings don’t have a ton of baked-in bias.

All the same, there are clearly some problems with the rather blithe suggestion that the problems of browsing online can be solved by algorithms when this kind of content is so common on the internet, and especially when these algorithms are largely written by companies that are making money on this kind of content. I’m guessing we’ll talk about this further when we get to Algorithms of Oppression…

2 thoughts on “Where Not to Screw Around”